Also known as the Reception area, the Breezeway between the Federation Gallery and the Seafarers' Gallery is home to a small gift shop and a display featuring a giant sea captain next to a ship's wheel with navigation lamps.

An exhibition  of historic lenses and other lighthouse equipment is on display, as well as a single outrigger canoe from Papua New Guinea. 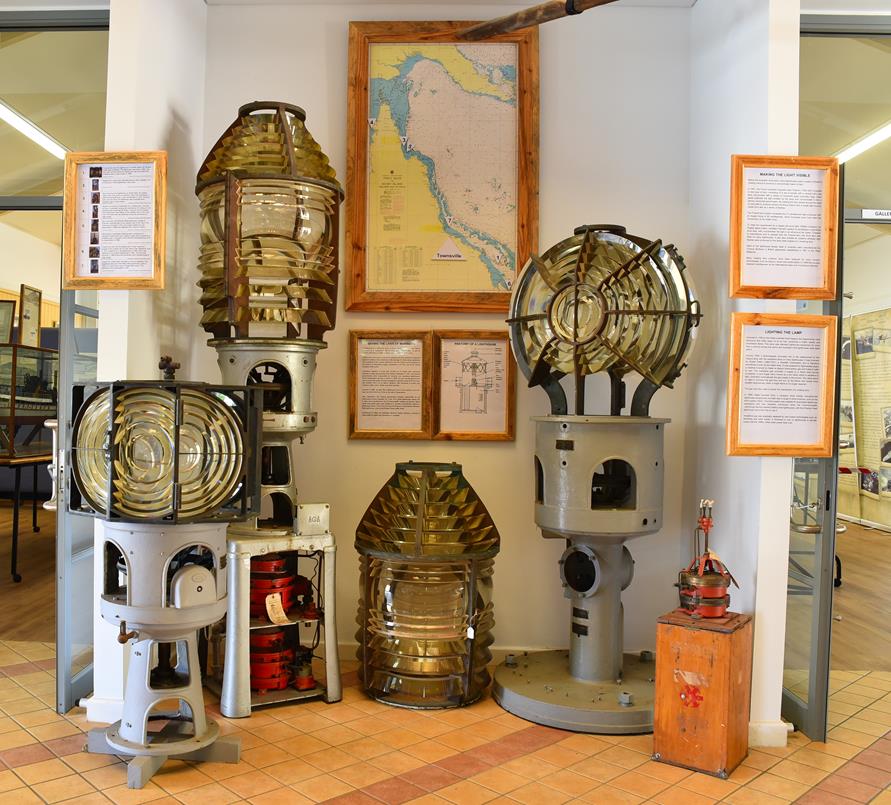 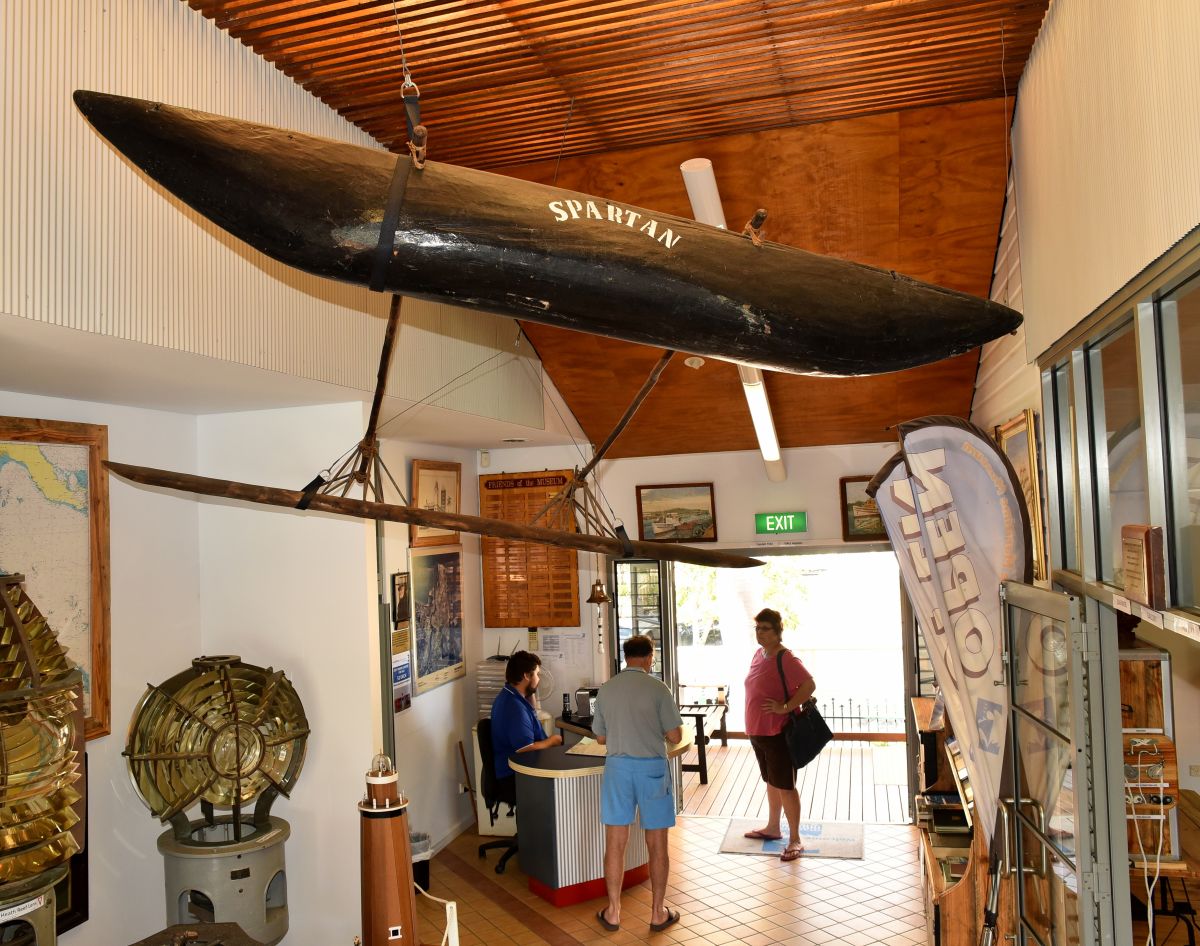 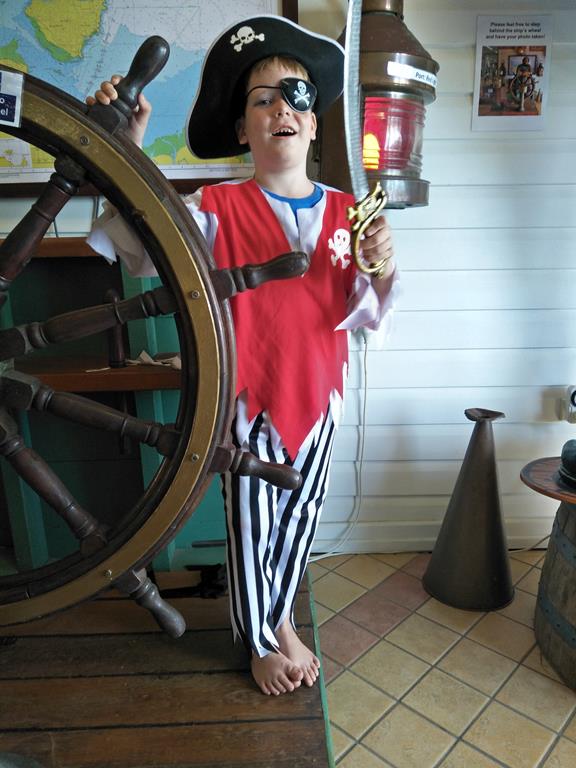 Don a pirate outfit and have your photo taken at our iconic ship's wheel!

Battle of the Coral Sea

A display of panels, artefacts, model ships and dioramas tells the story of Townsville’s association with the two world wars at sea, with as focal point the Battle of the Coral Sea (4-8 May 1942), which was fought between Japanese and Allied naval forces only about 885 km (477 nautical miles) north-east of Townsville. The two Royal Australian Navy vessels that participated were HMAS Hobart  and HMAS Australia. The showpieces amongst the models are HMAS Nestor (dedicated to Neville George who sailed on the ship and later founded the Museum) and the American aircraft-carrier USS Lexington. A model of HMAS Albatross, an early seaplane carrier, represents the history of the Royal Australian Navy between the world wars. Also on show is a model of the famous (or infamous) World War I German auxiliary cruiser (or raider) Seeadler, probably one of the last windjammers (large steel-hulled sailing ships) used for waging war. Enhancing the display are a series of short video documentaries, courtesy of the Australian National Maritime Museum, featuring the story of the Australian submarine AE2 and Australian troop transports during World War I.

Also on show are two World War II documentaries, loaned to the Museum thanks to the generosity of the Australian National Maritime Museum. The one documentary, titled Clash of the carriers, features the Battle of the Coral Sea, using original footage and state of the art animation, making the battle through stunning visuals and sounds real as never before. This documentary is part of War and Peace in the Pacific 75, a program of the Australian National Maritime Museum supported by the USA Bicentennial Fund. 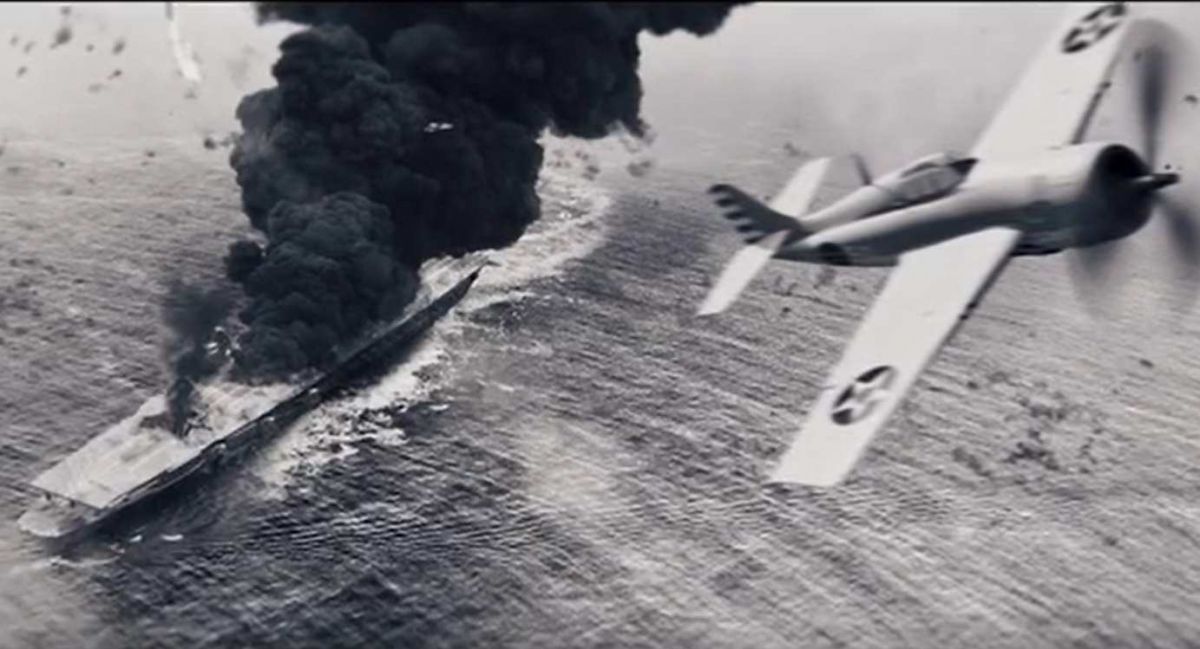 The other documentary confronts the visitor with the human side of the battle through interviews with Australian and US Coral Sea veterans, both moving and entertaining. 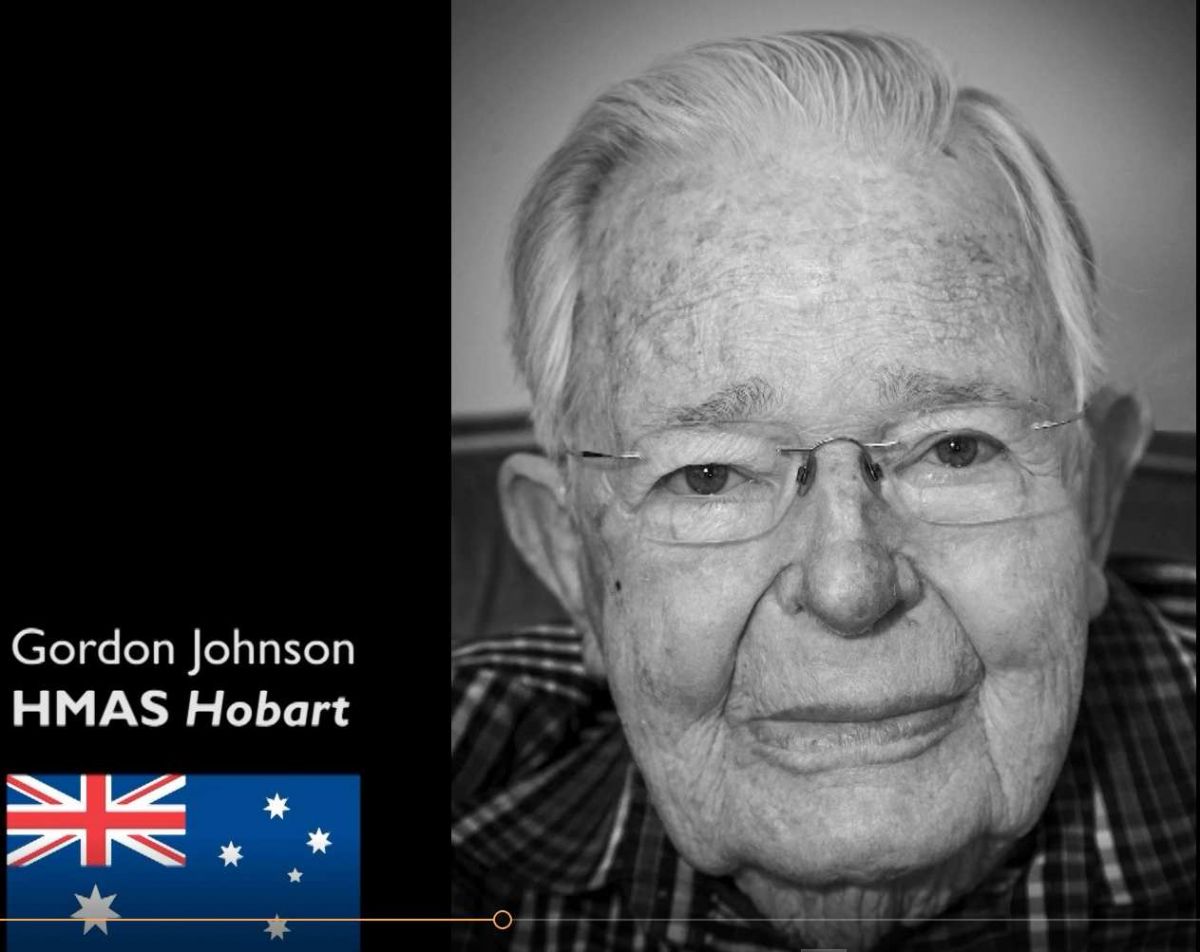 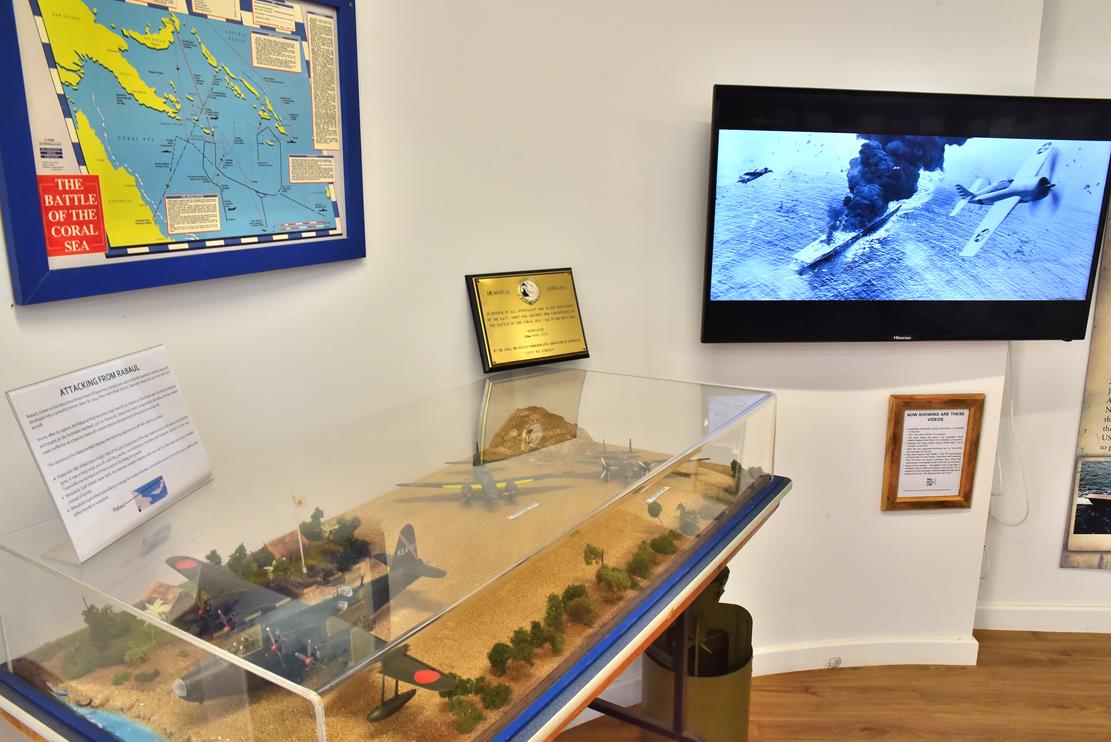 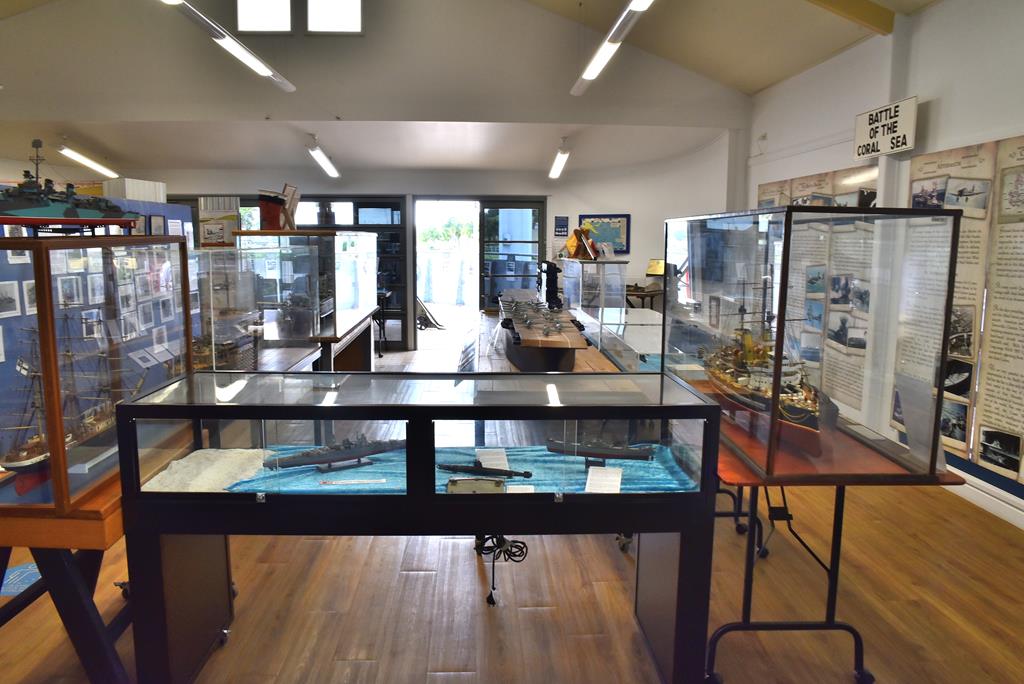 The Women's War 2 exhibition , consisting of display panels and display cases arranged around a mock-up of a typical North Queensland living-room during the war, complete with a piano (owned by the Breen family during the war) and blackout curtains. This exhibition tells some of the stories about life in Townsville during the years 1939-1945 from a young woman's perspective. The twelve participating ladies whose experiences are showcased had all worked in different local industries in the defence of the country, many of them associated with maritime industries. 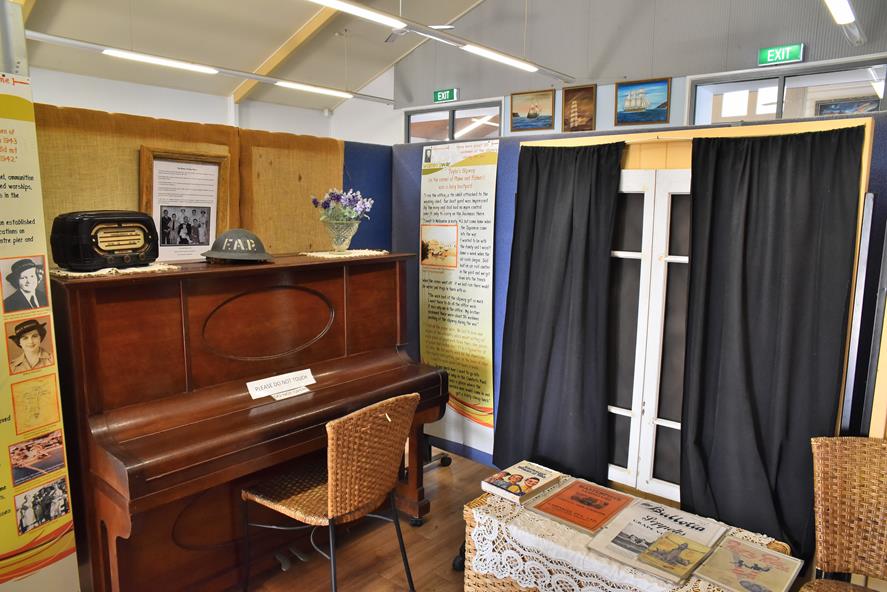 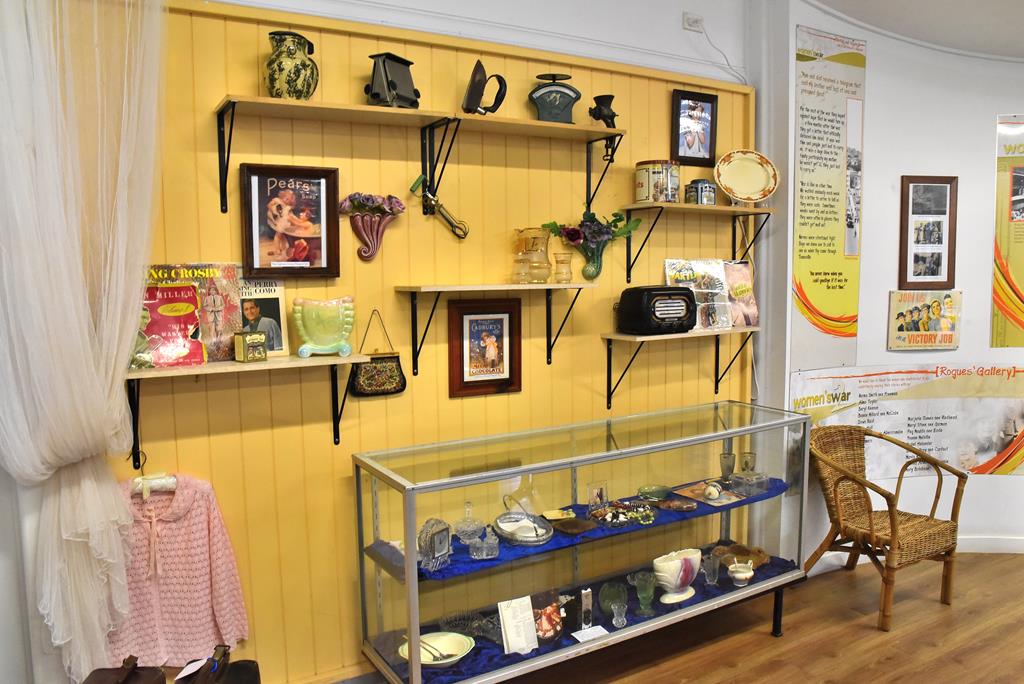 Rise of our City Port

This permanent exhibition is bringing history into the future showcasing how intertwined Townsville and the Port have been since 1864. It follows the development of the Port of Townsville - and of Townsville - in a series of interactive displays, including virtual reality, giant digital games, a live vessel tracker and a ship simulator.

The use of digital technologies has created an exciting, hands-on environment for adults and children to learn more about the important of shipping in North Queensland and how the Port of Townsville became Northern Australia's largest multi-purpose port. 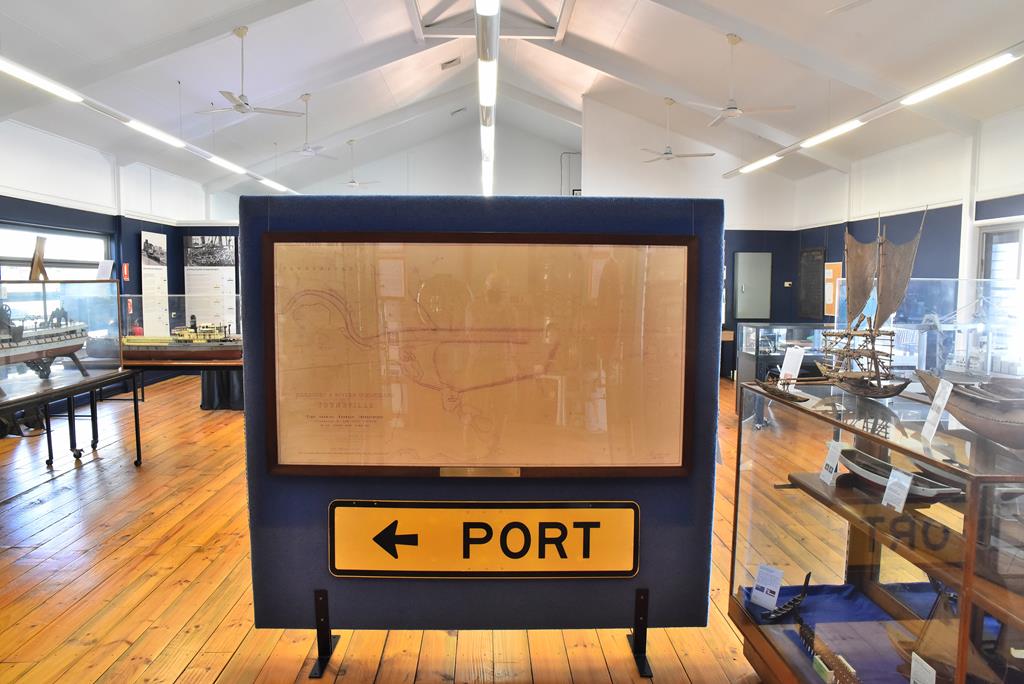 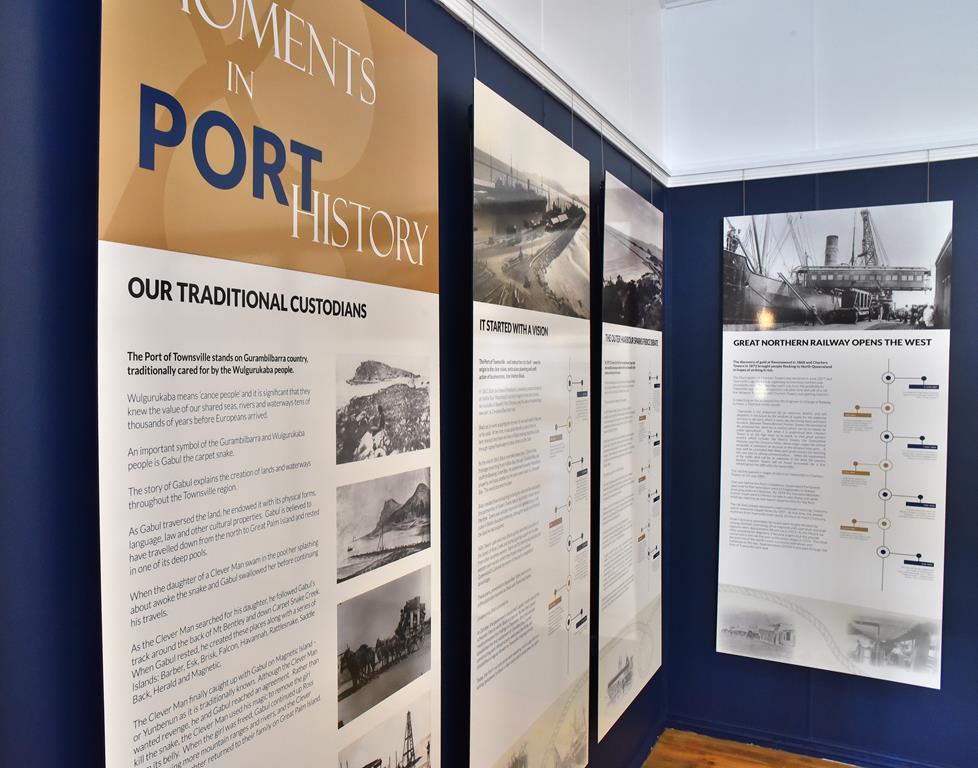 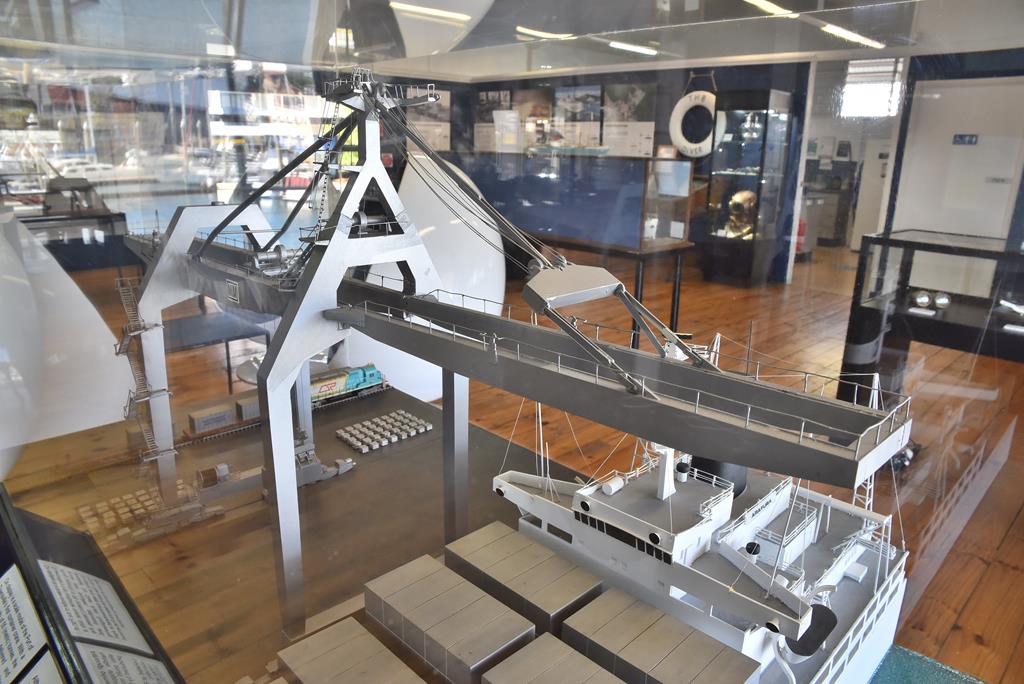 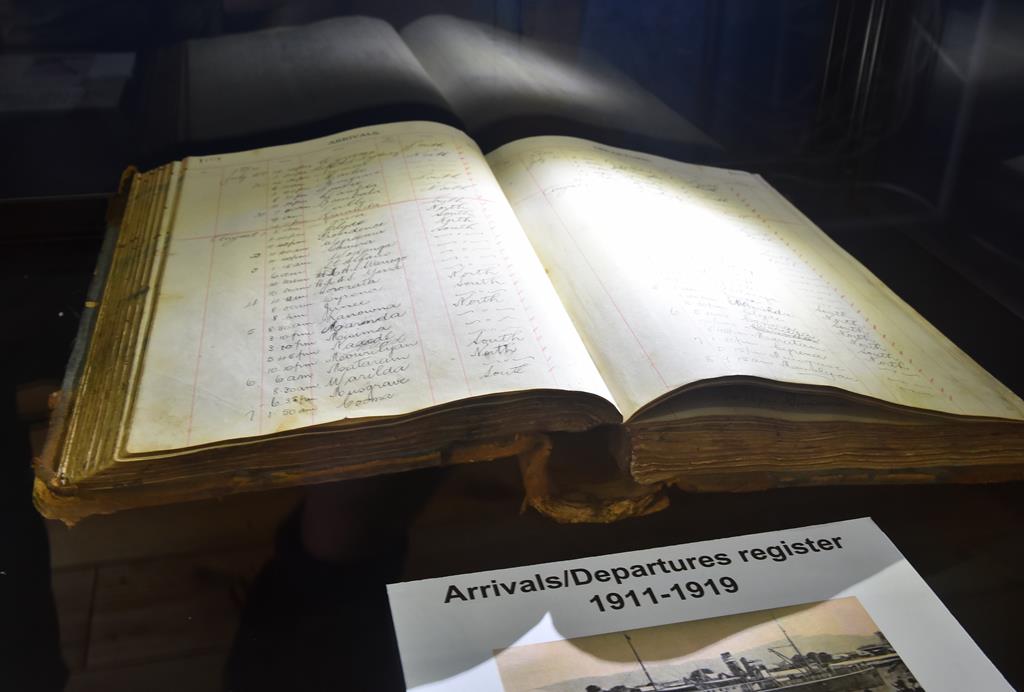 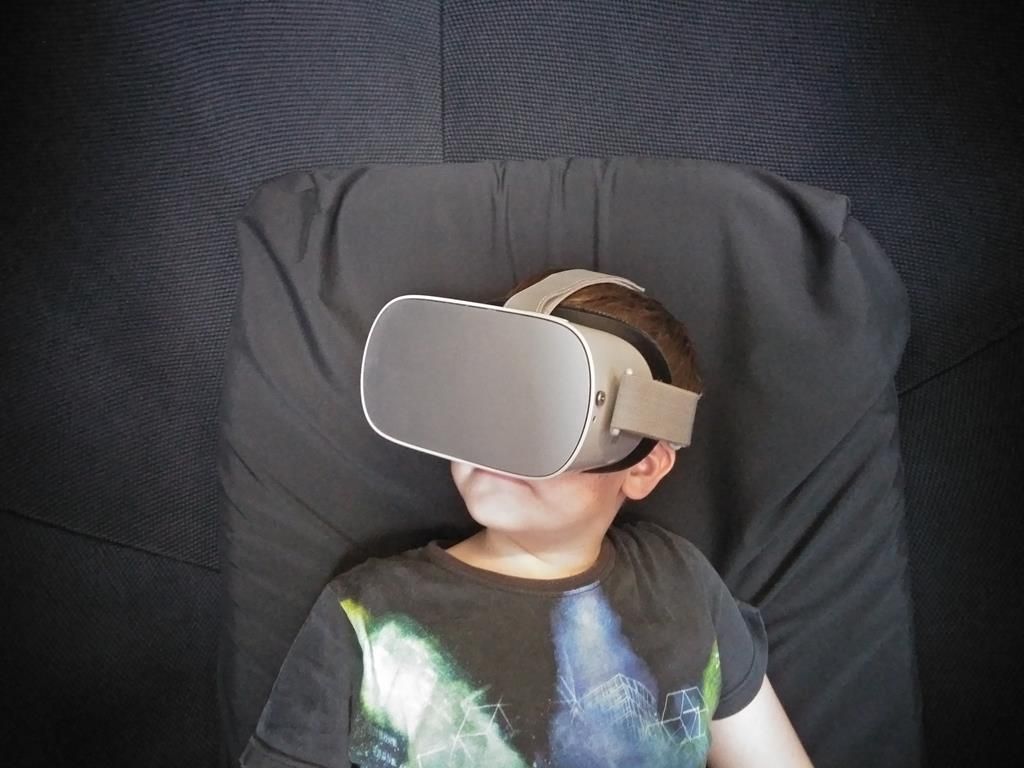 Located between the Seafarer’s Gallery and the Port Building, this outdoor area commemorates Royal Australian Navy casualties of the Pacific Theatre of War during World War II, the people who died when the steamship Yongala was lost (1911) and the members of the Allied commando unit Z Special Unit who died when attacking Japanese shipping in Singapore harbour, October 1944 (Operation Rimau).

There is space for more memorials and please contact us if you wish to erect one that commemorates a maritime event or personality. 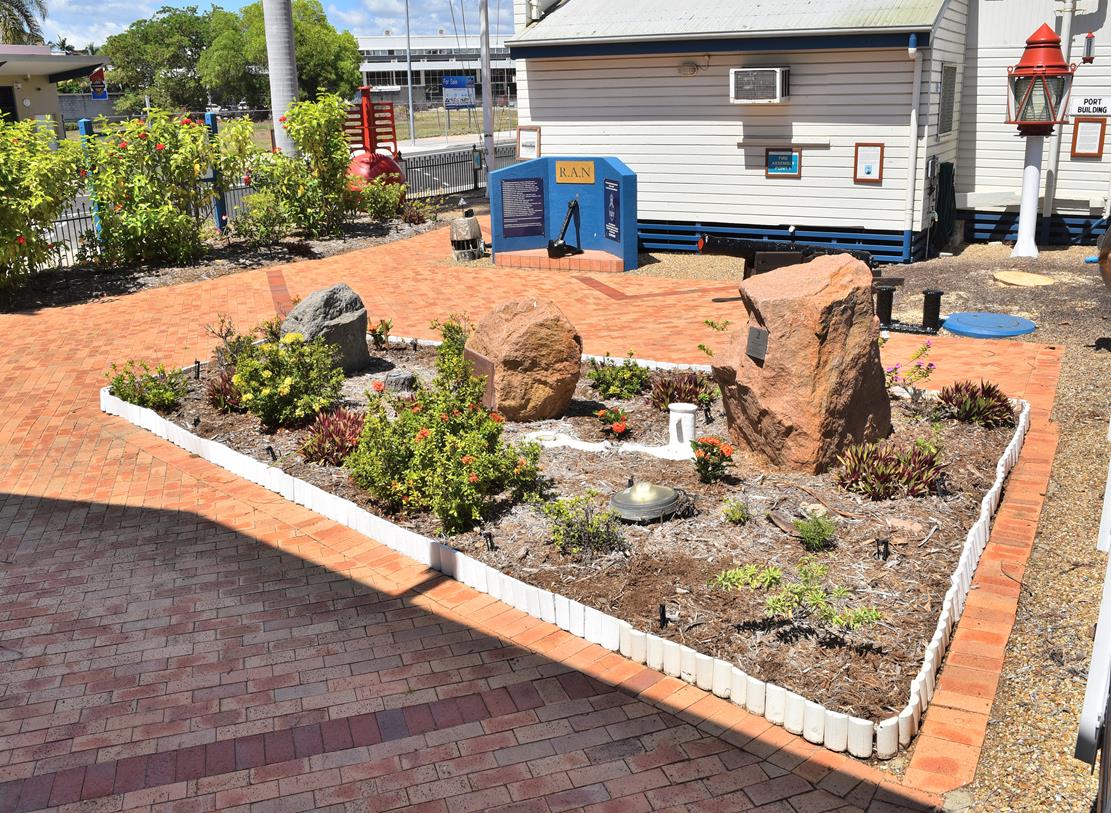 A gallery in the Port Building is dedicated to the post-war history of the RAN, with as focal point the Fremantle-class patrol boat HMAS Townsville, featuring a model, uniforms and a video documentary. 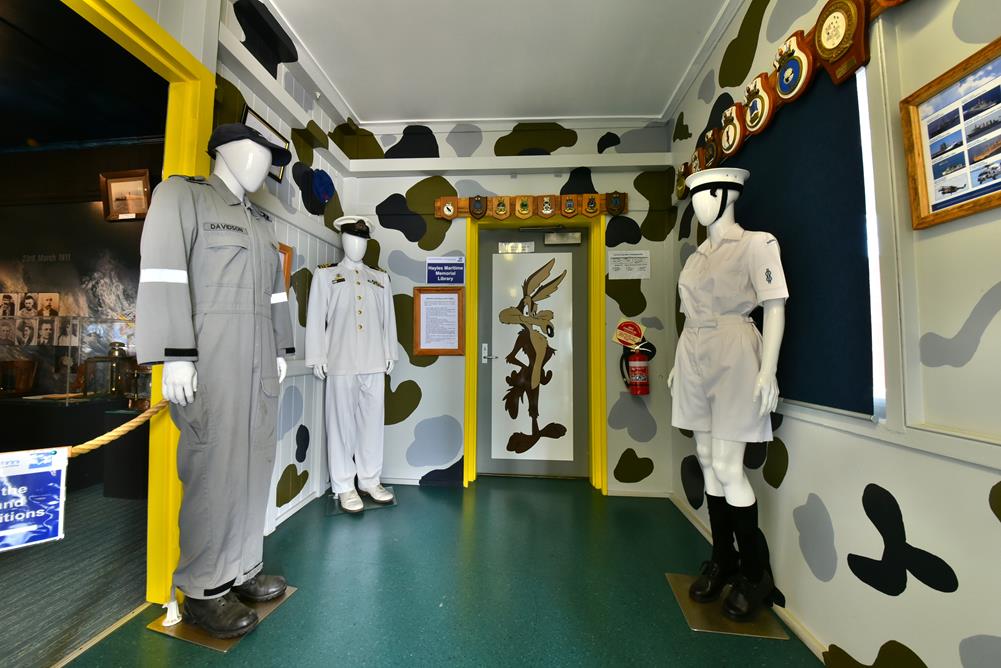 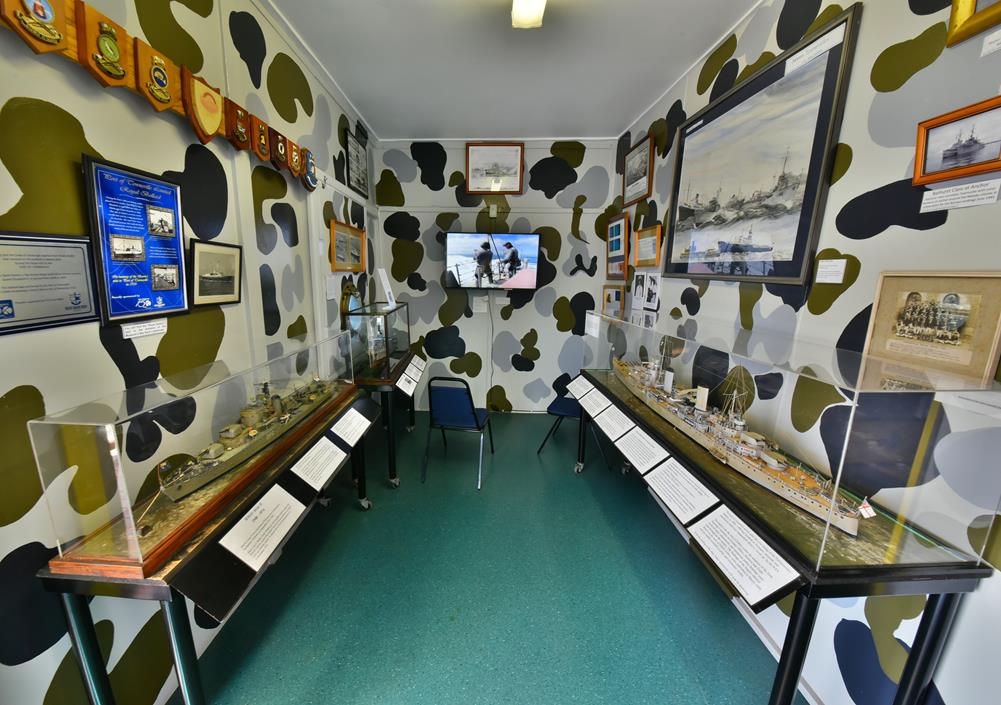 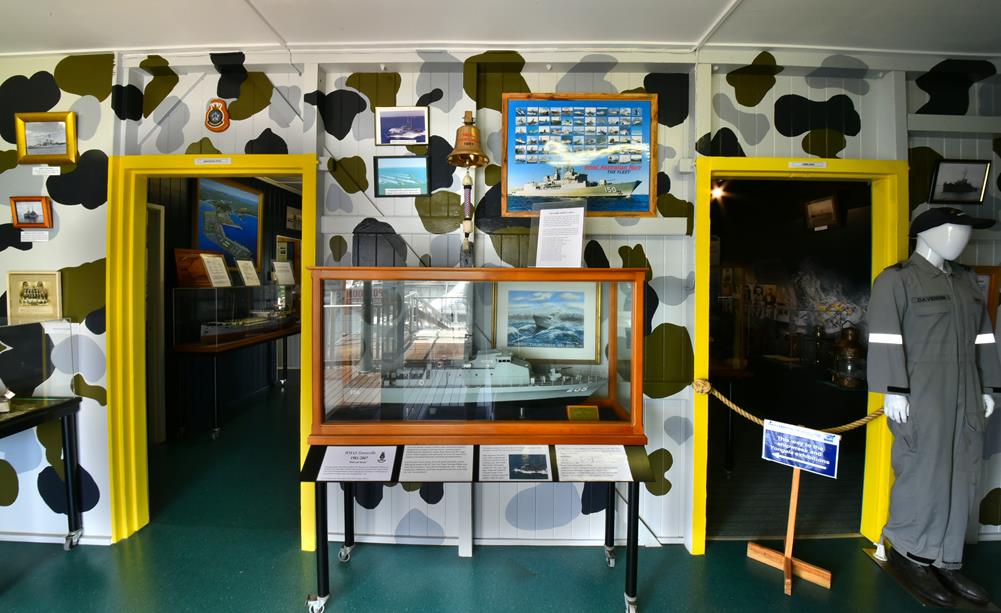 Two areas inside the Port Building tell the story of the disappearance and discovery of the steamship Yongala through interpretive panels, a video documentary and displays of original artefacts, including the ship’s bell. 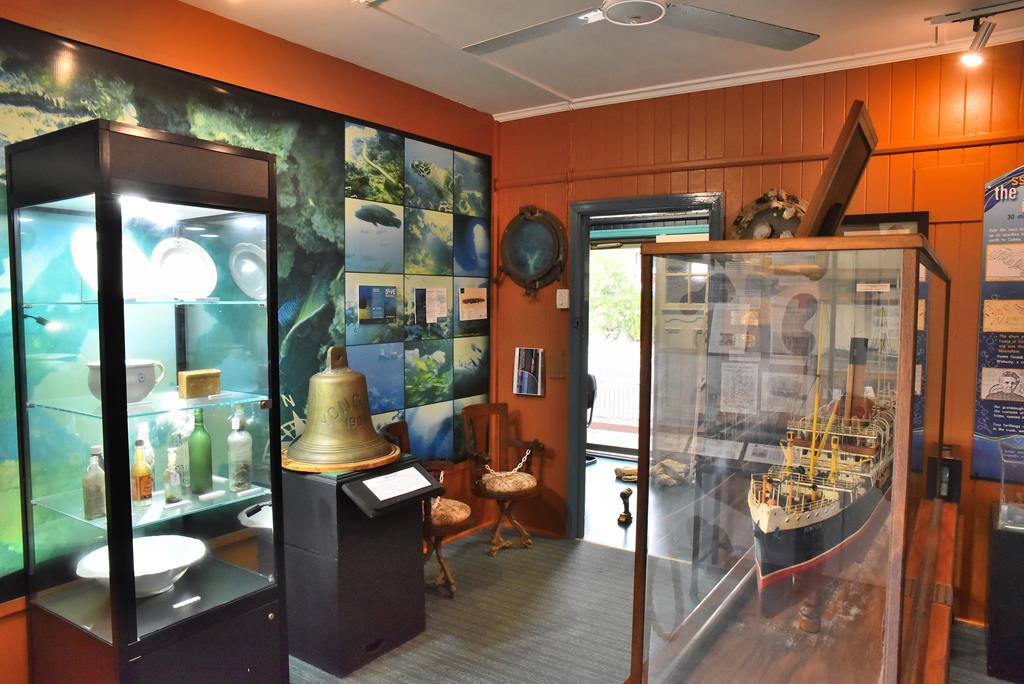 A small area inside the Port Building is set aside to tell the story of the pearling industry in North Queensland, featuring a diving suit, diving hard hat and dive pump. This exhibition is still under further development. 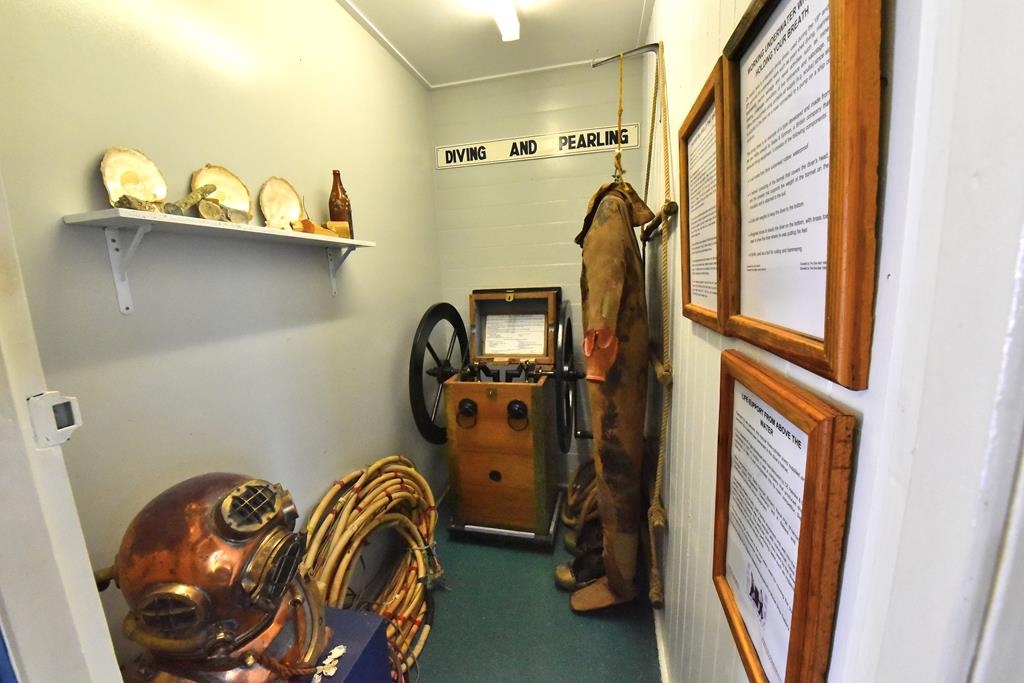 This lighthouse is situated between the Port Building and the Model Ship Gallery. After relocation it was officially opened to the public in September, 2003.

Bay Rock is a small mound of granite situated west of West Point, Magnetic Island. The lighthouse was one of the first to be erected in Queensland in 1886. Its light was essential for the safe passage of vessels entering Cleveland Bay from the north or for anchoring in the main shipping anchorage off Bay Rock, or for those vessels making for the Quarantine Station at West Point. Shallow water and reef in this area made early navigation both difficult and dangerous.

The light source was an open flame kerosene burner of 1000 candle power, and in clear weather was visible for about 14 nautical miles. The tower itself is 8m tall, and when positioned on Bay Rock, the light was 29m above sea level. A small house was also built on 'the rock' to accommodate the light keeper's family.

The last light keeper was John Lawson, who had been on Bay Rock for less than a year when a tragedy befell him in March 1920. Returning to Bay Rock with five friends in a small fishing boat one evening, the vessel was capsized in a sudden squall. The weakest three stayed clinging to the boat, while the others swam to Bay Rock in order to raise the alarm and return to pick up their friends in the light keepers boat. Although they searched all night, no sign of either Lawson or the others was found. The search continued for several days but yielded only the small boat.

Following this incident it was decided to replace the manual function of the light with an automatic mechanism. This meant that light keepers and their families did not have to live on this isolated rock again. Mrs Lawson and the five children were relocated to the mainland.

Although only the top section is original, the lighthouse is of historic significance, being associated with the safe passage of local shipping in the years before and following Federation. It is also associated with local light keeping families, many of whose descendants remain in the Townsville area.

With the help of the emergency services helicopter and generous community members, the lighthouse was relocated to the museum from Bay Rock in 1992. 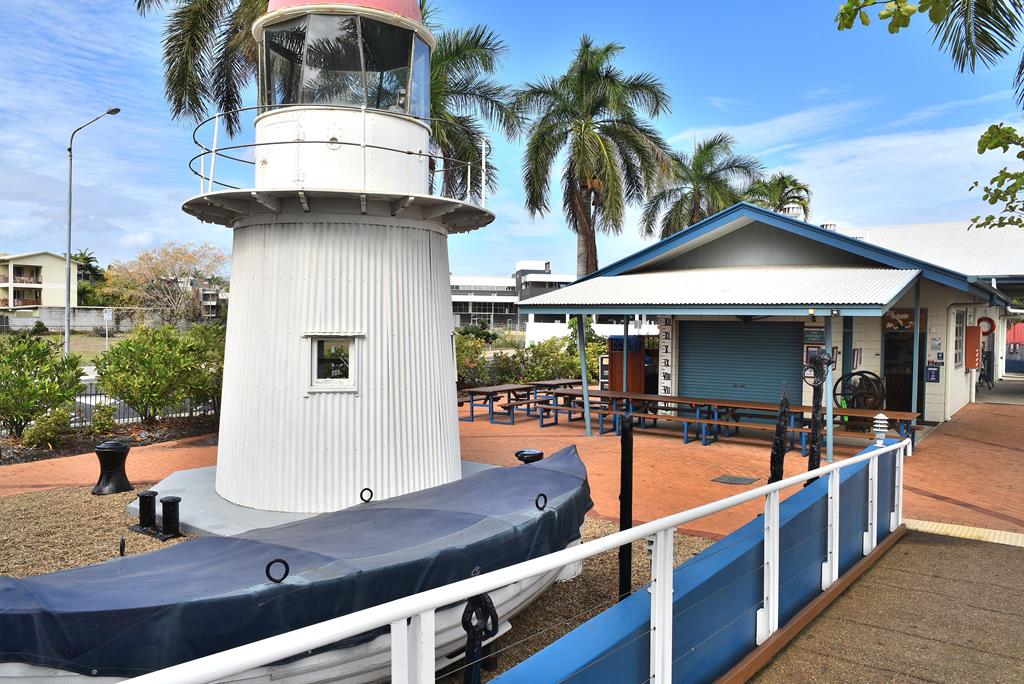 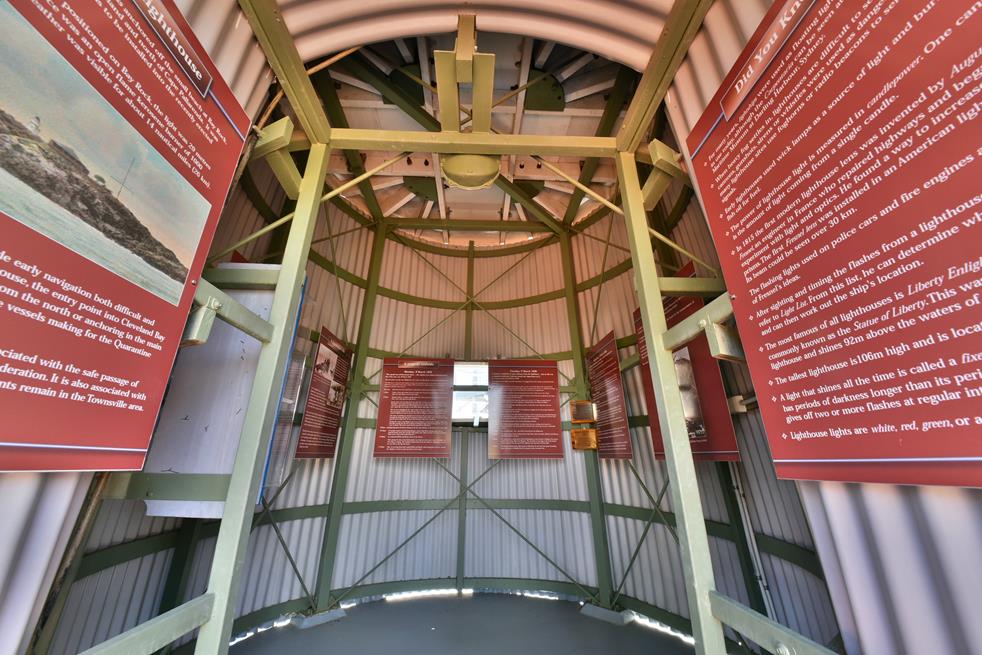 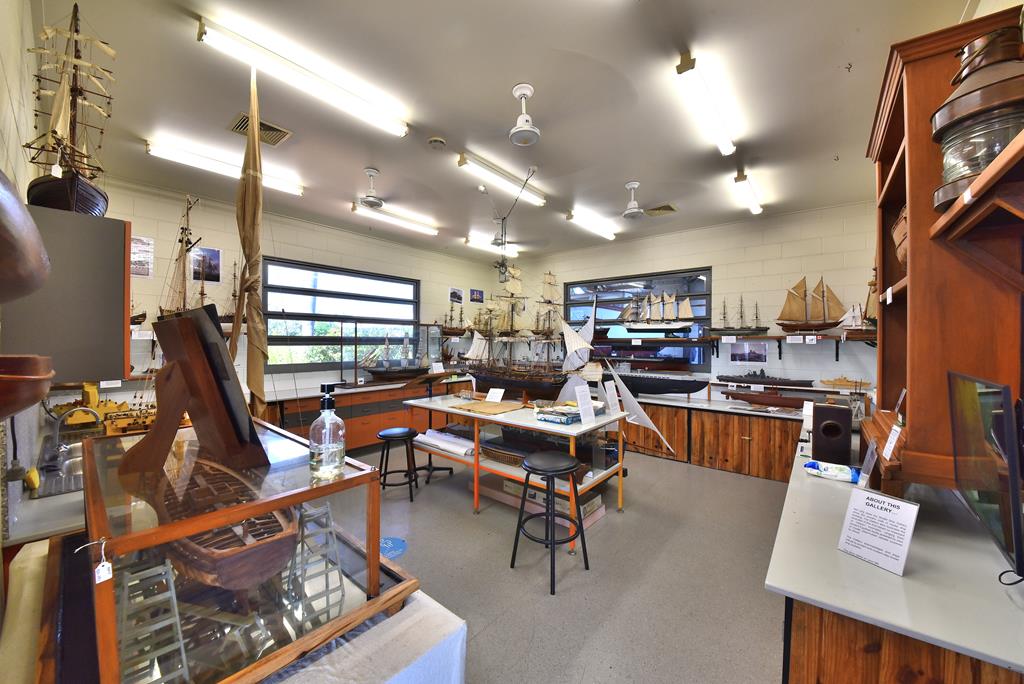 The Boat Shed is currently being reorganised as a display area. 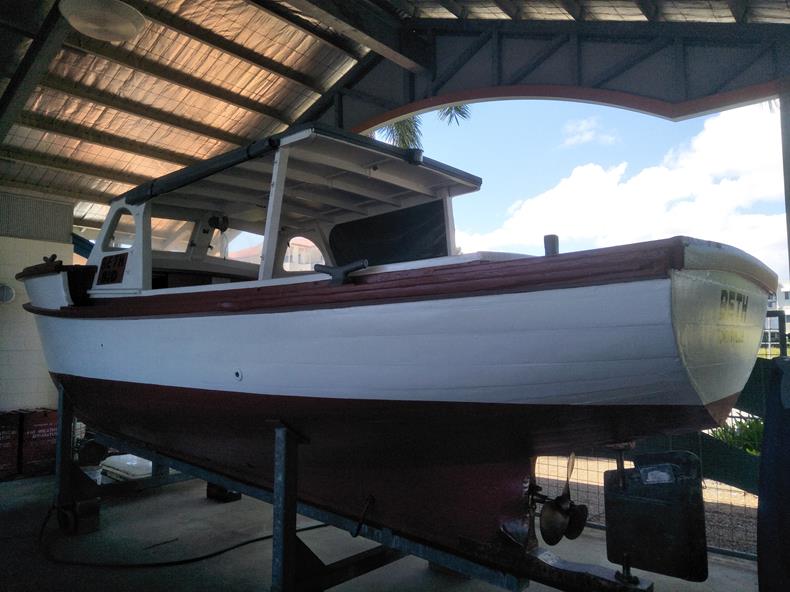 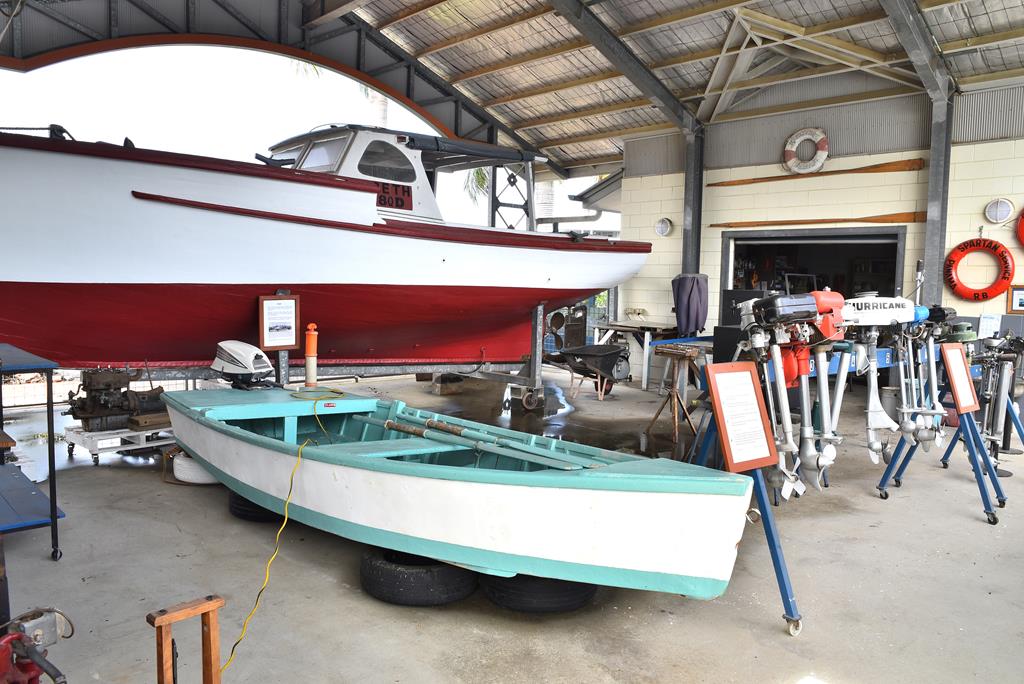 Located behind the Boat Shed and workshop at the end of the Museum precinct, the Gun Deck displays a rare 1880s naval 5-inch breech-loading gun. It also offers a view of one of Townsville’s oldest shipyards.

This Mark III 5-inch (127 mm) gun was a type of early British breech-loading naval gun designed in the 1870s to use up old gunpowder propellants for muzzle-loaders. The gun’s weight was 2,030 kg and it could fire about ten high-explosive shells per minute over a distance up to 8 km. These guns equipped several small gunboats of Colonial navies in Australia, such as Her Majesty’s Queensland Ship Paluma. It was not a very successful design, so it was soon discontinued in favour of 4.7-inch quick-loading guns.

A 5-inch gun, mounted on a recoil system invented by the British industrialist Josiah Vavasseur, was installed on The Strand for exercise purposes in 1895 and was fitted with a shield for land-sea defence. Decommissioned in 1913, it was relocated to the military museum at Kissing Point Fort in 1983. In 1992 it was donated to the Maritime Museum (acquisition number 992.122).

Other guns that have survived are two at HMAS Cerberus (RAN training base in Victoria), one in Queen’s Park, Maryborough (QLD) and one on The Esplanade in Cairns. 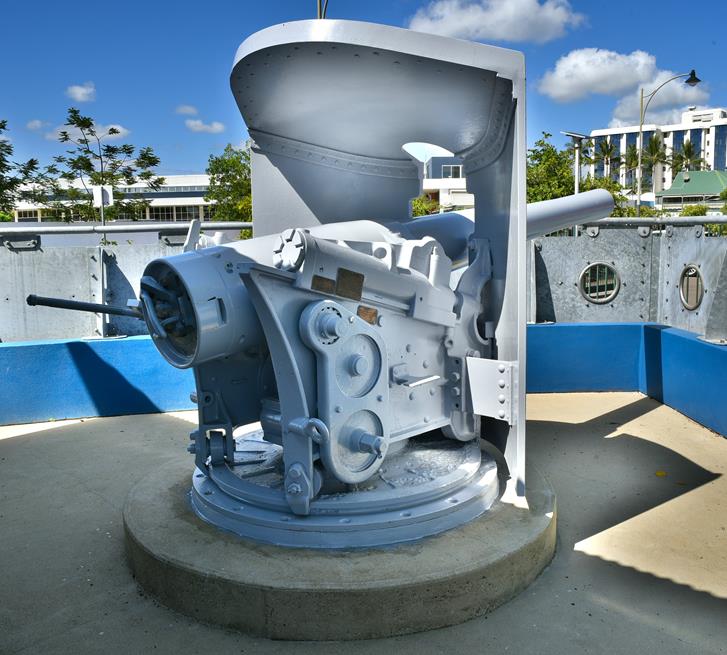 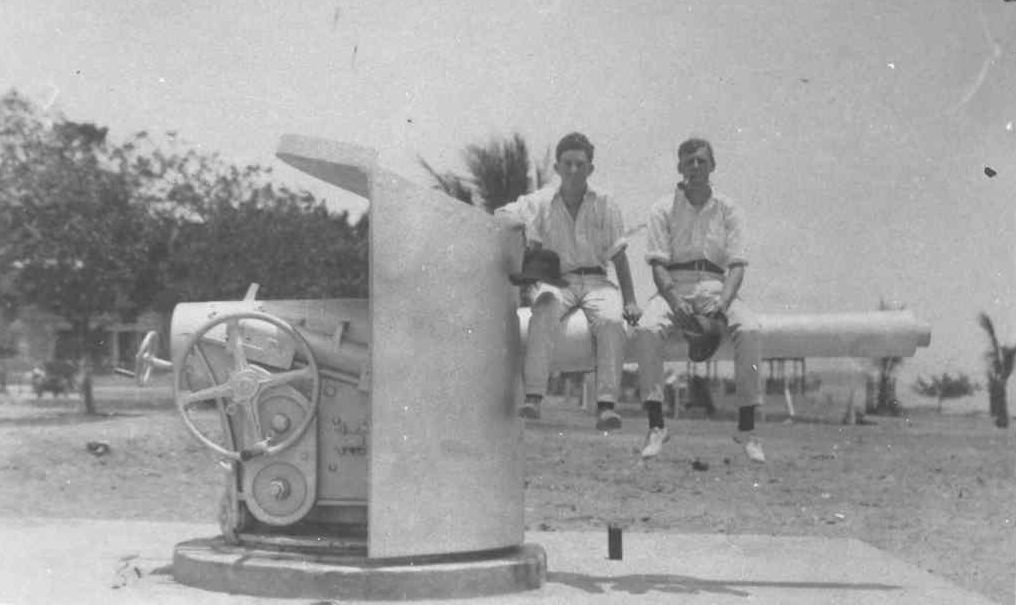 Located at various positions in the garden are some more objects on display, such as a 1930s wooden clinker-built lifeboat, a home-built fishing dinghy with an inboard engine, anchors and lighthouse lenses.

Located at various spots are types of bollards, used to moor small boats and large ships. A few were made here in Townsville. 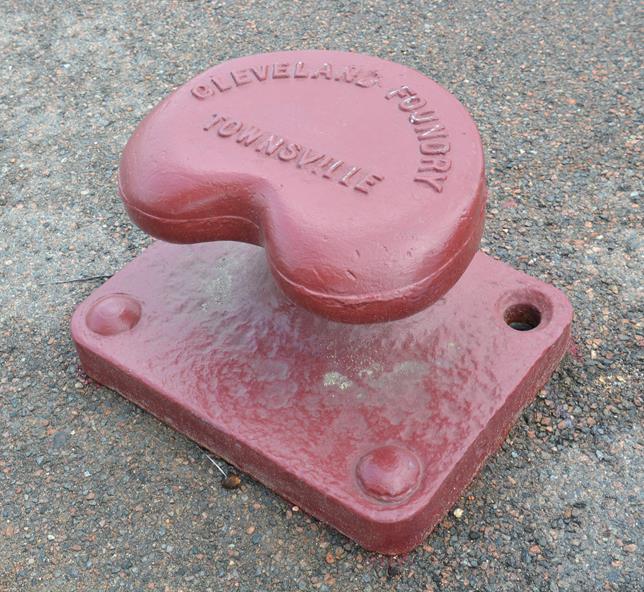 These outside objects include the two oldest items in the Museum collection, both dating back to the 18th century. A heavily corroded barrel of a naval six-pounder cannon is one of the many relics retrieved from the site where the British transport ship Cato was shipwrecked on the Great Barrier Reef in 1803. And a naval stock anchor commemorates the ill-fated French exploration expedition, commanded by  Jean-Francois de Galaup La Perouse, which was wrecked at Vanikoro in 1788 with the loss of all lives. This particular anchor probably originated from one of the ships, the Astrolabe. 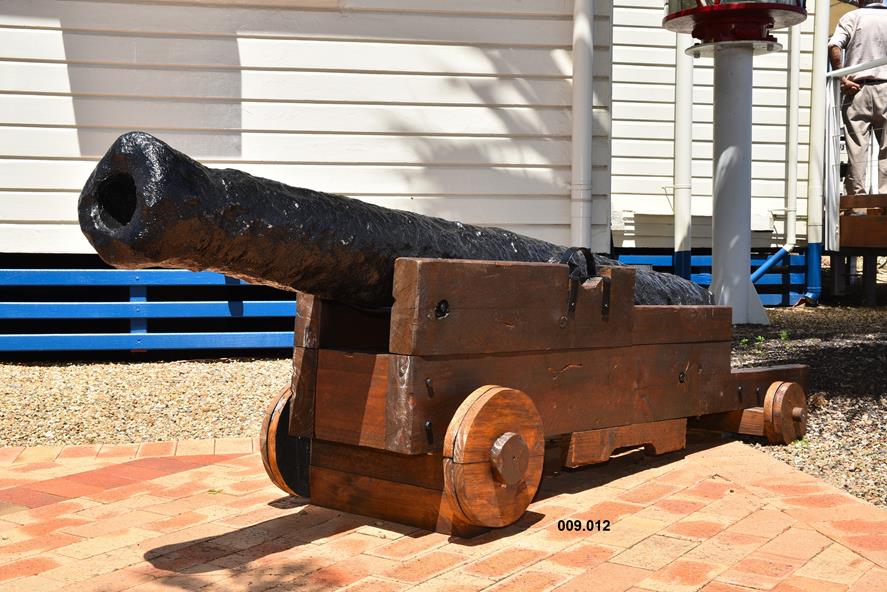 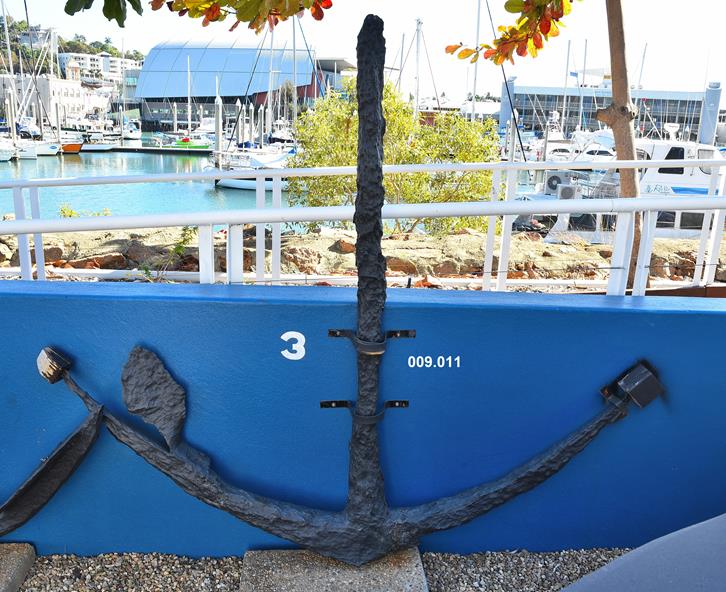